So, I’ve been slowly accumulating ITS barcodes for samples of Boletus edulis s.s. from around the northern hemisphere (mostly in North America). There have been some proposals in both Europe and N. America to distinguish subspecies of Boletus edulis (e.g., B. edulis var. clavipes, B. edulis var. persoonii, etc.), and some of these have even been raised to the rank of species (B. pinetorum, B. rubriceps). While some of these proposals are based entirely on morphological features, others have claimed support from molecular evidence. In both cases, I have been skeptical of these taxonomic divisions for two reasons: 1) Boletus edulis is extremely variable morphologically, and 2) sampling has been very incomplete, with vast areas of its range without representation. In the former, morphological features that are consistent between collections could be due to ecological context such as host or abiotic factors such as sunlight, temperature, humidity, and pH. This variation might also result from heterogeneous distributions of genes and alleles that are the basis of these different phenotypes within a panmictic population, such as we see in other organisms including humans. Thus, it is critical to sample individuals that are representative of the complete range of a putative species, to ensure patterns of geographic structuring are not misinterpreted as non-overlapping when samples come only from the extremes of their distribution. Non-representative sampling like this can be particularly problematic for DNA barcoding, because the total variation used to diagnose the limits of monophyletic clades is dependent on the variation observed in the samples. So, if the samples come from two extreme ends of a continuum with no samples representing intermediate locations, they will appear to be mutually exclusive, leading to misdiagnosis as reproductively isolated lineages, i.e. species.

The ITS clade representing 220 phased (i.e. heterozygotes were split into corresponding haplotypes based on sequencing clones) sequences of Boletus edulis s.s. has some structuring in it, but it is not clear-cut and highly polytomic. For instance, some sequences of specimens are clustered geographically, such as the group recently segregated as B. rubriceps from the southern Rocky Mountains. But, further sampling has revealed 1) southern Rocky mountain B. edulis/B. rubriceps are not morphologically homogeneous, and 2) heterozygous individuals that carry haplotypes represented in the southern Rocky mountains AND the west coast of North America. Both observations strongly suggest either current gene flow between those populations or incomplete lineage sorting of ITS copies. So, rather than being independent and reproductively isolated species, there is either ongoing gene flow within a panmictic population that is structured geographically, or the population has speciated recently without enough time passing for ancestral multiple ITS lineages to sort among them. Because the ITS region is homogenized through concerted evolution, it seems that the explanation requiring multiple ancestral copies sorting among descendant lineages is less parsimonious. But, the mechanisms of concerted evolution are not well understood, so I can’t rule it out (I would love for some discussion about this!).

Below is a haplotype network constructed from the same set of sequences used for the phylogenetic analysis above. I used the HaploNet function in the R package ‘pegas’ (Paradis 2017) and plotted the pie charts according to composition of geographic representation. The legend indicates which region the haplotype is from: AK= Alaska, ENA= Eastern North America (east of the Rockies), EU = Europe, MX = Mexico, NZ = New Zealand, RM = Rocky Mountains (incl. CO, NM, UT, and MT), WC = West Coast (CA, OR, WA & BC). A few interesting patterns are apparent: 1) one haplotype (the most common in GenBank) is present in Europe and the western parts of North America (Alaska, West Coast, and the Rockies); 2) Eastern North America is distinct from all others except for one divergent sample that is from a late-season collection with an odd morphology under European conifers in western NY (so probably an import and not biogeographically honest); 3) samples corresponding to B. rubriceps have haplotypes derived from or shared with haplotypes in Europe, West Coast, and Alaska and appears to not be reproductively isolated. The New Zealand haplotype is shared with European haplotypes, confirming suspicions that it is an import with European trees. Although I consider this to still be preliminary, I interpret this structure as indicating ongoing, or until very recently, gene flow between populations in the Rocky Mountains, West Coast, Alaska, and Europe (via Alaska?), with reproductive isolation seen only in the eastern North American population (i.e. Boletus edulis var. clavipes should be recognized at the species rank, viz. Boletus clavipes). Given the diversity of haplotypes seen in Alaska, I would venture to guess that this is the crossroads of porcini migration, possibly representing an ancestral population that gave rise to expanding population to/from Eurasia via the Bering Land bridge ca. 12,000 years ago. 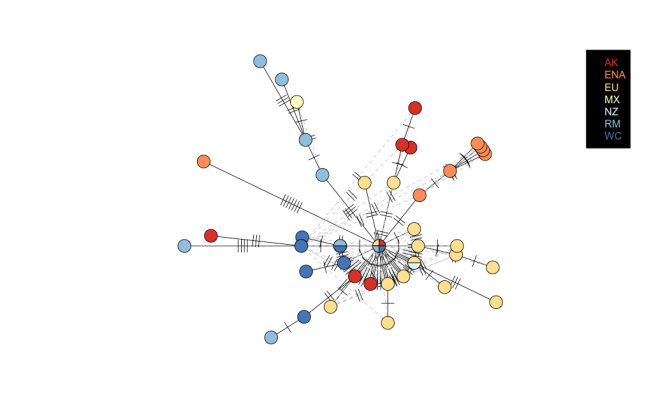